Update: If you use the new agenda editor, you can accomplish what’s described below with the “Editable Note” content block.

This post was prompted by a query from someone asking how to add an editable field for a meeting theme and words of the day to the agenda.

This is one of those features in the Toastmasters software for WordPress works the way  it does because it answered a specific need for my home club that may not be exactly the way others would want it to work. Those also tend to be the relatively poorly documented features — I’m trying to do better! — and may evolve over time as I get a better understanding of what other clubs want.

But here’s how it works so far, using the example of Club Awesome.

Every week, we include a blurb about the theme and words of the day at the bottom of the printed agenda.

In the editor, that is set up with this code (showing the editor in Text mode)

The code is [rsvpmaker_upcoming themewords=”1″]. There is no popup editor for it in the WordPress Visual editor like there is for the role setup tags, but it is represented as a placeholder image in the visual editor.

On the front end of the website, you can edit the contents associated with this field at the same time that you may be assigning members to specific meeting roles. 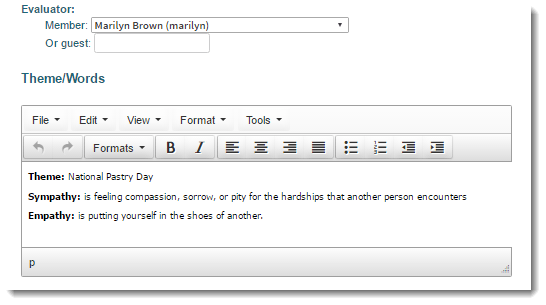 In our club, the VP of Education usually picks the meeting theme and assigns a couple of words of the day (we have a contest for best use of one of the words). Making this field editable as part of the same process as assigning meeting roles is easier than making the change in the WordPress editor.

The “agenda notes” codes on the agenda fill a somewhat similar purpose, except we typically use them for content that stays the same from week to week. I think of these as “stage directions” — in the example above, you can see “Toastmasters of the day gives out the awards,” which is a standard part of how we close out the meeting.

The theme and words of the day, on the other hand, are different every week.

TODO: Make this component easier to customize, for example by providing a way of changing the headline to something other than “Theme/Words.” Any other requests?

Test the member experience at
demo.toastmost.org